Please, be welcome to join the Stelvio pass tour on its 20th Anniversary, as a single stage of the original Lotus tour "Stelvio or Bust 1999" organized by Tony Churly, back in the days.
The Passo dello Stelvio (Stilfser Joch) is one of the best roads in Europe where to drive our Lotus and of course it played a major role in the development of the Elise, as featured in the documentary "Elise - The Inside Story".

Luciano Curti, who was the original organizer of this specific stage 20 years ago, is happy to announce that he's taking care of the organization, this year as well.
Luciano has created a true Italian Club style schedule for the event: He booked a contingency of rooms at a Hotel at Livigno. Including safe parking and the usual amenities. Additionally, he arranged for a number of opportunities to socialize, share your stories and enjoy Italian food.

The schedule looks like this:
Participants will arrive on the evening of September 12th and enjoy gather for a group dinner at the hotel.
On Friday morning, the tour start, which includes some signature stages of the original itinerary, namely Passo Mortirolo and the stop at Rifugio Lagasol. You can find the route in the picture below.
Next stop will be on the Stelvio, where Luciano has arranged for welcome drinks and a commemorative lunch.
The day will end at Livigno with dinner at the hotel. The event itself will close on Saturday 14th, after breakfast.


We (Daniele and Joerg) are trying to support him organizing cars from the whole Europe.

If you would like to get back to us, we are happy listening to you in English, German, Italian and Spanish.
If you are interested, please write us a private message to stelvio.20th.anniversary@gmail.com and we'll be back to you as soon as possible with the details and registration form.

Please make sure you join this initiative, not only because it was built by the original "Day Organizer" of the 1999 tour. We would also like see big group traveling to Stelvio together in the spirit of "S.o.B.99", rather than setting up or joining small, disconnected and scattered mini events instead. Let us revive Tony's big tour that saw around 70 Elises appear on the Stelvio on September 15th, 1999.

Oh, and by the way: This is the tour that Elisa Artioli herself will be joining. Of course with her Elise she was given by her grandfather Romano, as a gift for her work she did 1995 in Frankfurt, when the Elise was first unveiled.

See you in Livigno! D&J

thanks everybody that already registered.
We reached until now 72 cars and more than 100 participants.
We might consider to close the subscriptions before August 12th despite as it was originally planned.
If you still want to participate, hurry up

#104190  door danytheghost
16 sep 2019, 16:39
Thanks everybody that were participating
Hope you enjoyed the roads and the huge organization we put up for this event in an incredible short time.
Almost 90 cars and 120 participants were not easy to handle, but today, proud that all the efforts turned into something unforgettable for most of you and for us as well.

A special thanks to everyone who drove quite a lot of kilometers to join us to the top of Europe, and another special thanks to the best collaborators here below.
Thanks Luciano for taking care of the overall overnight, delicious food, clothing and merchandise and for his big patience to everybody.
Thanks Jan to make the long journey up to Livigno and back even more enjoyable with some nice roads across Germany and Austria.
Thanks to Tony which still wanted to join, of course with number 01.
… and Thanks Elisa, delighting us with her presence, friendship, fun and sweetness.

As mentioned to some of you during the meeting, we've got something in mind for the next one. You’ll hear from us as soon as the ideas will be mature enough to be presented. 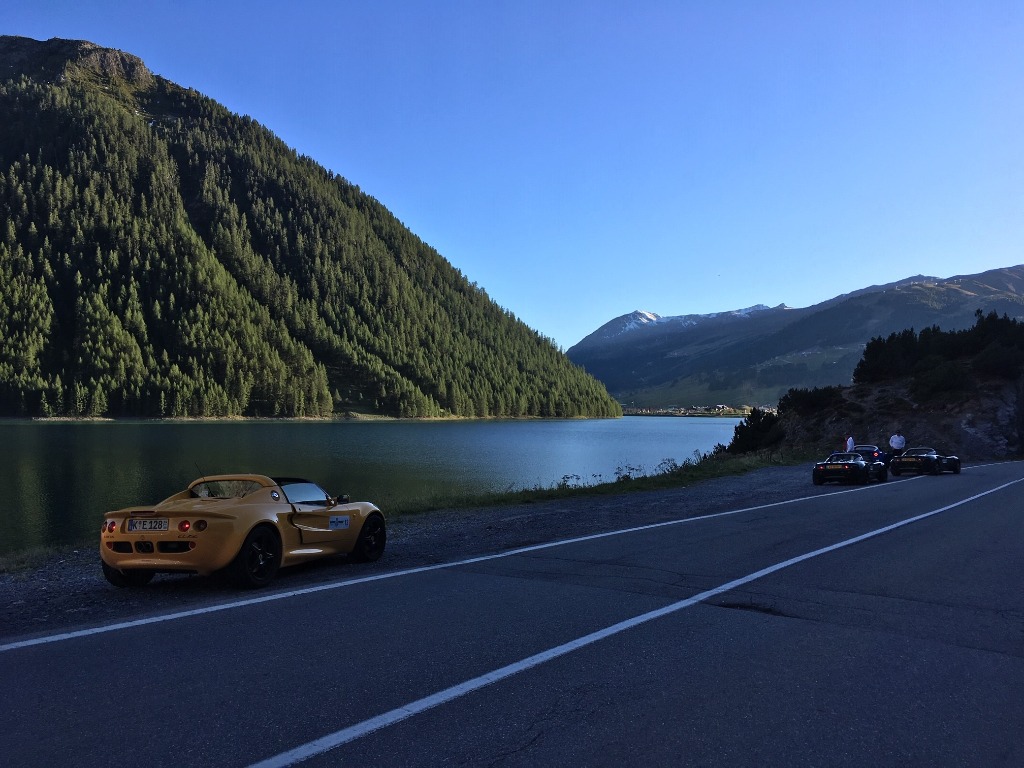 Racing, because football only requires one ball